When Was The Horse Saddle Invented?

Even though the mention of horse saddles might make you think of the Old West, horseback riding and the horse saddle date back thousands of years. 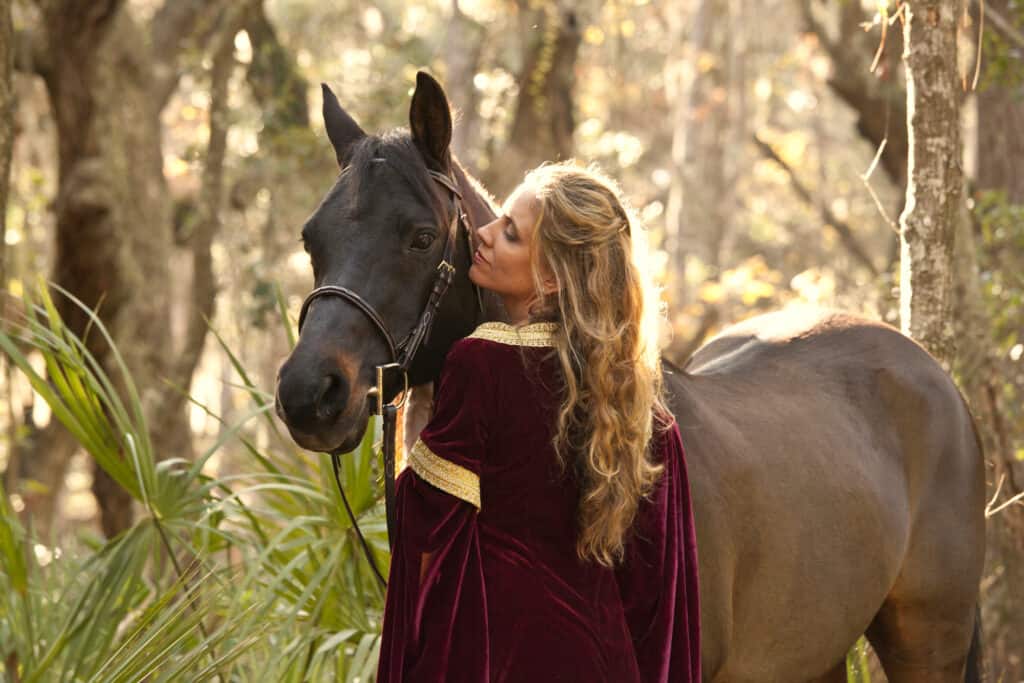 The history of the saddle traces many populations and civilizations before intersecting with the European discovery of America.

Although one type of horse originated in North America, the riding horses we know today were brought by Christopher Columbus in the late 1400s.

These Spanish horses were first brought to the Virgin Islands and then spread to other areas thanks to travelers, armies, and merchants. This is when Indigenous people were reacquainted with horses.

Since these animals spanned so many geographic areas and cultures, it’s unsurprising that the saddle wasn’t invented at any one time by a single person.

Instead, the idea of a saddle was created over time and perfected throughout history as people experimented with the best ways to ride horses. Even if one style of horse saddle was popular in a particular place, different saddles were likely used in other cultures because their needs varied.

For example, a nomadic tribe that used horses needed to be able to travel long distances while carrying what they needed to survive. Meanwhile, a culture that only used horses for hunting and then returned home to permanent or semi-permanent settlements wouldn’t need to ride as long.

Plus, horse saddles can be very different depending on the type of horse. Horses with different anatomy and physical features will naturally need different saddles. Shape, weight, frame, and balance can all affect how a saddle sits and whether the animal is safe and comfortable.

The origin of the first saddles isn’t clear since recorded history only dates back so far.

The Assyrians, for example, were known to use this style of cloth saddle, and descriptions of it appear in the Bible. Cloth saddles weren’t in widespread use and were mostly reserved for people in the upper classes.

They would add accents or fringe to the cloth saddles as a sign of wealth.

These saddles provided far less comfort than modern saddles. They lacked the shape, frame, pommel, and higher seat of what we now recognize as a horse saddle.

The Evolution Of The Saddle

From the period of the first basic saddles onward, the saddle evolved in stages as each element was invented and tested.

While it’s not always possible to see which saddle designs failed since they weren’t as likely to be used over time, there are many historical references that allow modern researchers to see how a saddle designed in one period differed from others.

The most important addition happened first when the Scythians decided to try adding a frame to the saddle to give it more support and a better fit on the horse’s back. In modern terms, this saddle frame is known as a tree.

The Scythian version of a tree wasn’t very complex. It was simply two parallel leather cushions held together by a type of girth.

From there, they added other components like the curved cantle portion at the back of the saddle’s seat, leather thongs to attach various parts, and the pommel.

This gave the saddle more shape and cushions to better accommodate the rider’s weight, but it wasn’t ideal.

The wooden saddle tree that most closely resembles a modern saddle dates back to 200 BCE during the Han dynasty in China. The Romans also had a solid-tree design by the 1st century CE that featured four separate horns on the corners of the squarish saddle.

The use of solid saddle trees made of wood was a significant improvement over the Scythian design.

Since the wood that made up the frame allowed the rider to sit physically higher in a raised seat, there was more space to balance the rider’s weight on the horse’s back.

This had the added benefit of improving the health of horses. With less strain on their backs, they were able to work longer without injury, which increased their life expectancies as well.

This alone was an improvement over the treeless saddles that were used before. Plus, solid trees made of wood set the stage for another major invention that would revolutionize the saddle: stirrups.

It seems strange to imagine a horse saddle without stirrups, but saddles didn’t have them for thousands of years because there wasn’t enough support for that type of saddle design. 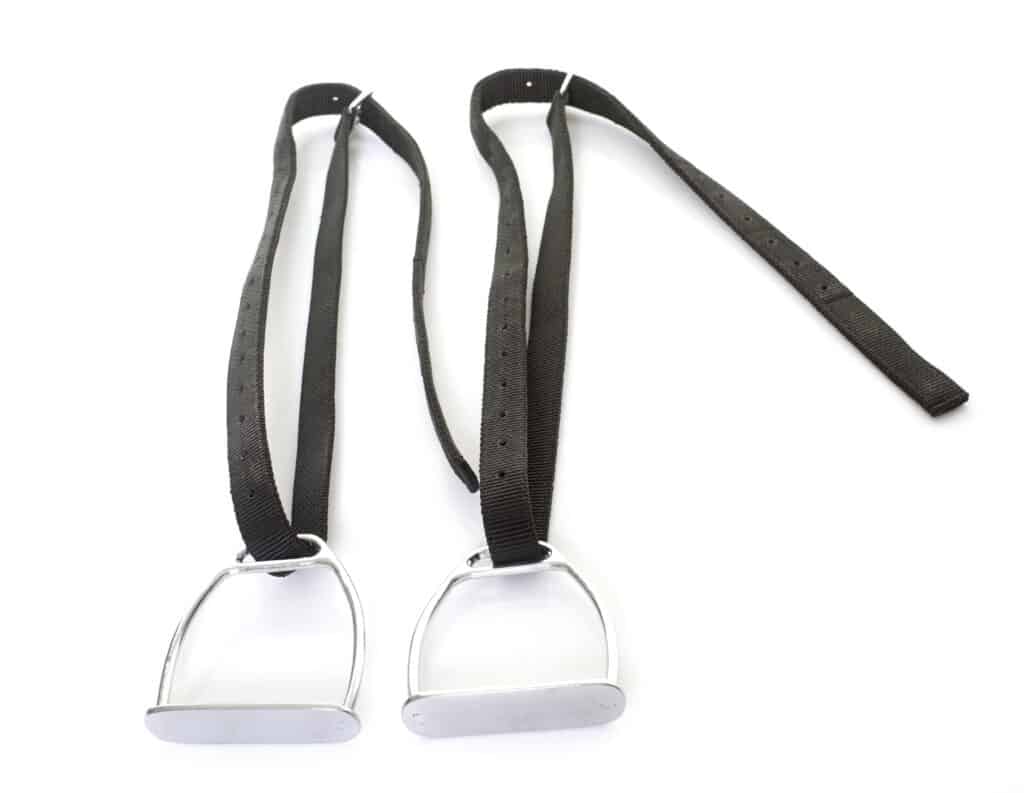 Early treeless saddles were just simple cloths with a girth attached. Adding a saddle stirrup would have unbalanced the rider or hurt the animal.

The idea of supporting the rider’s feet was only possible with a solid tree. The first stirrup, which is believed to have developed in India during the second century CE, was just a basic leather strap to hold the very end of the rider’s foot.

Some historians believe that the Mongolians developed the modern design with a leather stirrup on each side around the same time period. However, the first record of such a system dates back to China and the year 302 CE.

The leather straps helped people get into the saddle and supported their legs while they were riding. This saddle design and the stirrup became popular throughout China and spread into parts of Europe by approximately 477 CE.

They would later reach West Africa, where mounted armies from the Mali Empire took advantage of stirrups to improve how they fought.

During the Middle Ages, the ability of a rider to fight on horseback could make a huge difference in a war.

As a result, the saddle changed many times during this period to add stability and durability without adding strain to a horse’s back. Stirrups changed as well to give riders extra support.

Changes made by various riders and groups included adding a higher cantle in the back of the seat and a pommel.

The high cantle and pommel made it easier for riders to move around in the saddle and avoid accidentally falling off during a ride.

All of this was made possible because of the original invention of the tree and the stirrup years and years prior.

Before saddle horns, ranchers would simply tie ropes to their horse’s tail or the main body of the saddle itself. This was irritating and unsafe for the horses. 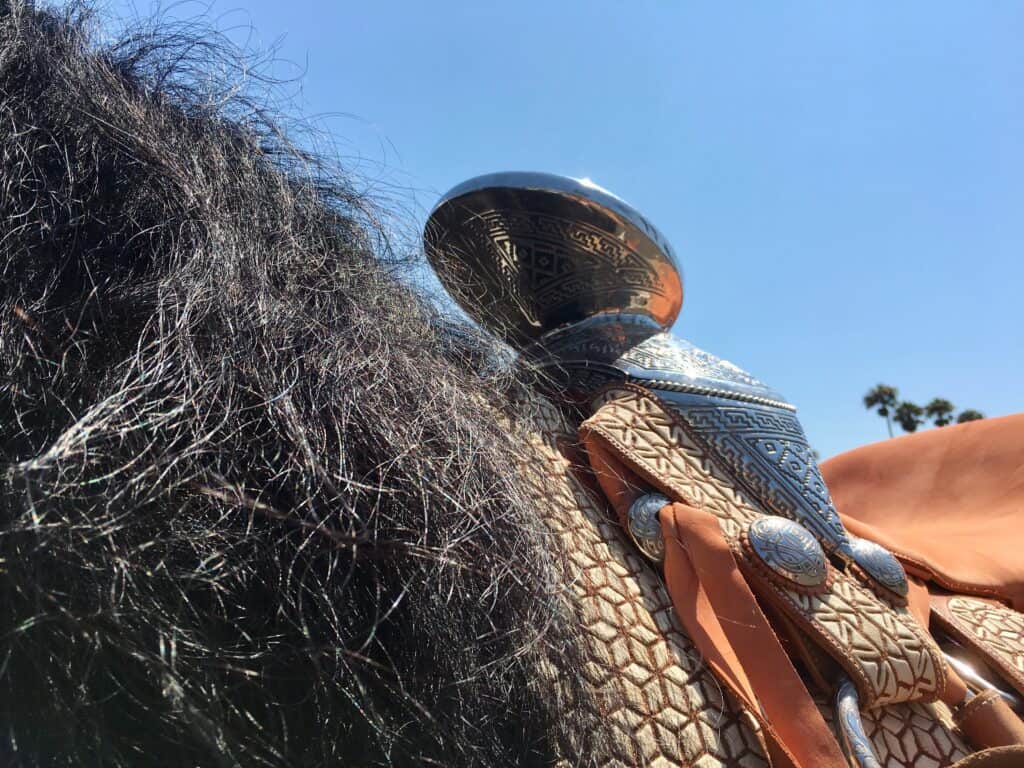 Mexican and Spanish vaqueros developed the saddle horn to solve this issue and give them a better place to tie off while roping a steer.

Unfortunately, this technique took some trial and error, especially once saddles with a horn became popular in the American Southwest.

In Texas, ranchers would sometimes lose their thumbs if they weren’t fast enough to catch a steer and secure the rope without getting their fingers caught in the process.

After a while, early American cowboys started tying their lassos around the horn first before they even attempted to catch the steer. This technique is still used while roping cattle.

As the horse saddle developed, even more, it eventually split into two main styles: the Moorish saddle and the Hungarian saddle.

The Roman Empire was so broad that it helped spread different saddle designs.

Roman saddles combined with Moorish designs in modern-day Spain and Portugal. These horse saddles would eventually become the Western-style saddle.

The Romans were also spreading throughout other areas at the same time. Their influence combined with European saddles to become the Hungarian saddle that was later adapted into the English saddle.

This is a very basic account of the general history since much of this occurred over centuries.

The History Of Specialty Saddles

Since many saddle styles throughout history were designed for war, they needed even more adaptation later. The saddles that fit war horses were made for fighting and to keep riders in place, so having a high cantle and pommel made sense.

A French horseman didn’t feel that was necessary for ordinary riding, so he created an English saddle with lower versions of each. He would later go on to help found the field of dressage, a subset of English riding that requires more control and coordination over the horse.

This kind of English saddle worked well with jumping. Once fox hunting became more common, many people switched. Other contributors further improved upon the design to promote a better jumping position where the rider could lean forward.

On the Western side, it became more and more important for working ranchers to have durable saddles that were comfortable over long distances. This includes the ability to carry equipment needed for traveling.

As a result, Western saddles tend to sit deeper, feature wider stirrups, and have more weight than English saddles since they need to allow for ranching and carrying riders’ equipment. The girth is also wider to support the combined weight and dimensions.

The Western horse saddle eventually evolved to cater to different specialties and events such as cattle roping, barrel racing, and trail riding. Riders may own more than one saddle depending on their needs and how they intend to ride.

Advances even continue today. Saddles with synthetic leather have emerged in recent years as an entirely new category. These horse saddles can accommodate those who want a cheaper alternative to a real leather saddle.

The modern Western saddle and the modern English saddle have a long history that dates back to 3000 BCE.

Although horse tack might not seem like a revolutionary invention, something as simple as the modern stirrup took centuries to perfect. The saddle is a great example of a multigenerational, multicultural invention that can’t be traced back to one region, person, or dynasty.

Even after saddle designs were widely in use, equipment like a saddle cover or saddle cloth still had to be invented as well.

Padding and flocking changed how saddles could be fit to a particular horse and how comfortable the seat would be for the rider.

Workers who needed to haul equipment or rope steer added the saddle horn to make the saddle fit a new need. From there, different groups developed their own techniques to use the horn as they lived and worked.

Thanks to all of these innovators and creative minds, something as simple as a piece of cloth with a strap to hold it in place became the modern saddle.

From hunting to warfare, horse racing to pleasure riding, it’s now almost unimaginable to think that the earliest riders didn’t have saddles at all.

No single person or group of people invented the modern horse saddle. The saddle developed the most throughout the Middle East, Central Asia, and nearby areas until it spread to modern-day Europe and Africa.

Did Cowboys Invent The Western Saddle?

Many groups and cultures contributed to the Western saddle. The design continued to change all the way up through the settlement of the American West when vaqueros from Spain and Mexico recognized the value of adding the prominent horn of a modern Western horse saddle.

Were Western And English Saddles Invented Together?

Western and English saddles can trace their roots back to the same places. At first, there weren’t two branches of saddles.

It was only once the solid-tree design and stirrups were in widespread use that they started to develop into separate styles. The Roman Empire helped connect different civilizations and spread different influences that would later combine into the Western and English saddle.

Hi, I'm Angela! I've been riding horses since I was 5 and have dedicated my life to my equestrian friends. Now I'll share some of my knowledge with you! 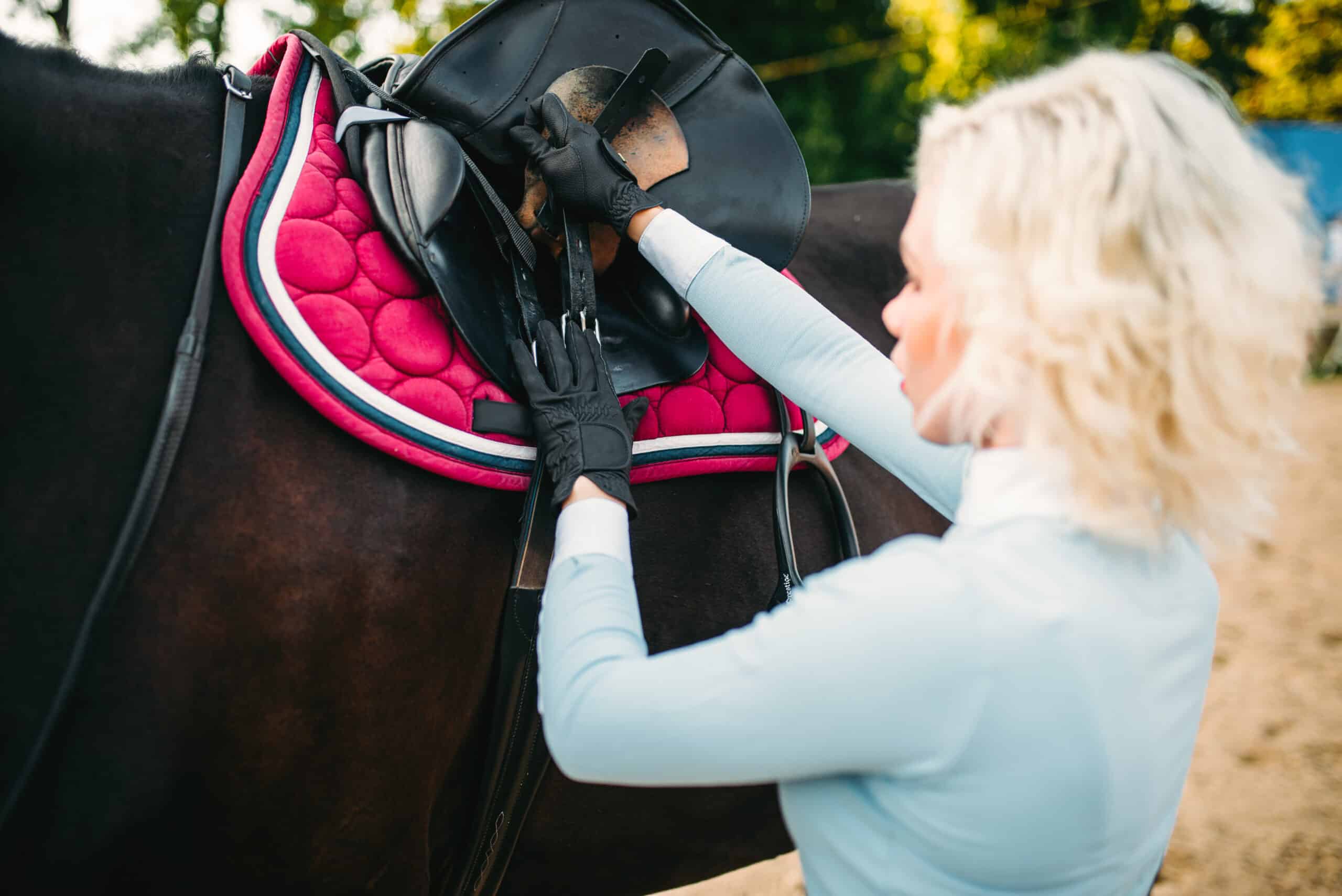 How Much Does A Horse Saddle Cost? 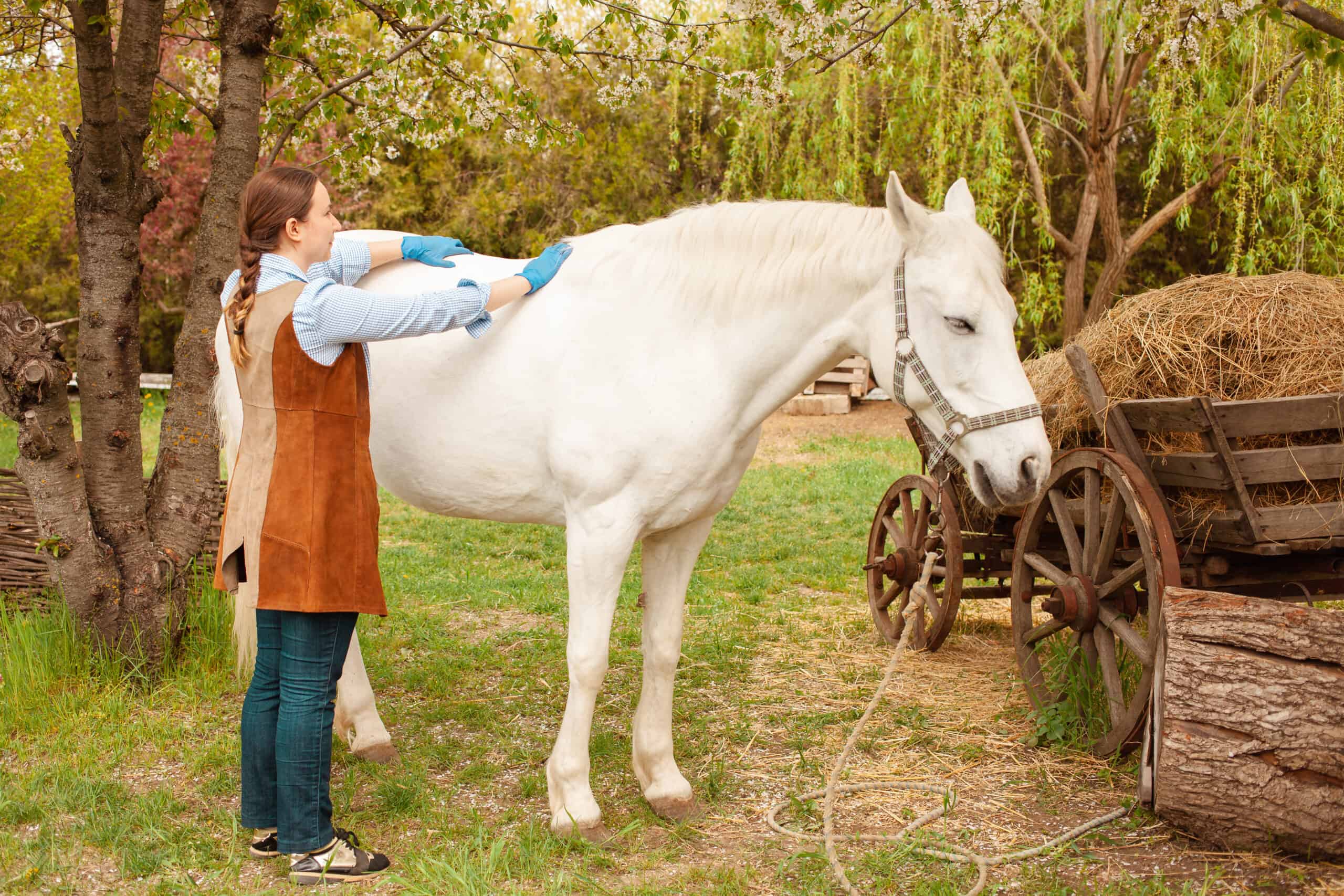 What Is A Horse Saddle Sore?